The worst British peacetime marine tragedy since the Empress of Ireland (1914) saw 193 people lose their lives unnecessarily, when Townsend Thoresen RORO ferry Herald of Free Enterprise sailed from Zeebrugge, her bow doors open to the elements.

On Friday, 6 March 1987, the vessel arrived at Zeebrugge from Dover on a chilly, grey, March afternoon. Loading at a fixed berth, she poured many tons of seawater into her bow ballast tanks in order to keep her nose down for simultaneous loading of her two vehicle decks. This 13,601brt Bremerhaven-built vessel, seven years old, was designed to carry some 1,300 passengers and 300 vehicles, but this evening only 543 persons and 129 vehicles went aboard, around 40% of capacity. 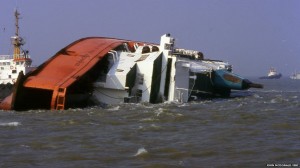 Reversing towards the Mole at 15 knots (maximum speed 22 knots), she powered up her engines, surged further, and began sinking, as thousands of gallons of seawater flooded into G Deck, themain vehicle deck. The Assistant Boatswain, whose duty was to close the bow doors, lay asleep in his cabin, and, since those doors were not visible by officers in the wheelhouse, the vessel became unavoidably unstable, vehicles rolling from port to starboard and back. Reversing engines and turning 180° to face Zeebrugge, she capsized onto her starboard side on a sandbank, all her lights out, in just 90 seconds.

Rescue attempts were hampered by the thickness of glass in the windows, but eventually it was possible to smash that glass and lower ropes to free those trapped inside. Kent Police sent over two officers, but the unwieldy Belgian policing system, comprising four separate and unconnected authorities, had no one body controlling and co-ordinating the incident. The Kent Police officers visited hospitals, compiling their own lists, although possessing neither actual police powers nor linguistic capability. The coroner directed that fatalities be handled in Belgium, but the Belgian authorities wanted British bodies returned home. An important distinction lay in that no post mortem (PM) is required in Belgium for unsuspicious death, whereas UK regulations require a PM for sudden death.

A week later, on Friday 13 March 1987, thirteen Kent Police officers, working in the mortuary, had recovered and identified fifty casualties, while elsewhere plans were in place to right the vessel and search for further bodies, an operation scheduled to take four weeks. Exactly one month after the tragedy, on Monday, 6 April 1987, the vessel was raised at low tide, righted, and, settling on the bottom, allowed divers to board and recover bodies from C Deck, the passenger deck.

Early in May 1987, windows sealed and wooden doors installed, she was pumped out, rising to the surface like a cork. By that time, 189 bodies had been recovered, four Kent Police officers remaining on site. With the vessel secured in the Outer Harbour, it was discovered that not one lifejacket had been utilised by the passengers on board. Passengers’ personal property had now washed ashore on French and Belgian beaches, police patrols being posted to deter/arrest looters. The International Undertakers agreed, for a fee, to handle all such property recovered, while Belgian salvors extricated vehicles from the car deck, storing them on the quayside, where Kent Police officers searched them for ownership clues. During the investigation into this tragedy, the CRISIS computer was employed for the first time, forerunner of the HOLMES system, now in use worldwide.

At the Court of Inquiry, Justice Sir Barry SHEEN examined the causes, lessons, and safety issues, describing Townsend Thoresen as ‘infested with a disease of sloppiness’. Captain David LEWRY, Chief Officer Leslie SABLE, and Assistant Boatswain Mark STANLEY, together with Townsend Thoresen itself, were held to be seriously negligent. LEWRY had admitted to operating a system of ‘negative reporting’.

Recommendations included the need to introduce CCTV, indicator lights on doors, safety windows (breakable at their centre by using a hammer), upgraded berths, draught gauges, and better accessibility to lifejackets, while undivided decks were prohibited.

The Inquest, in September 1987, was not concerned with attributing blame, rather with ascertaining who died, how, when, and where. Seven individuals were charged with gross negligence manslaughter, Townsend Thoresen being charged with corporate manslaughter. The jury, having returned a verdict of unlawful killing, was directed by Mr Justice TURNER to acquit the company and five individuals, causing the case to collapse. One fortunate outcome was that it is now admissible to indict for corporate manslaughter in English courts.

Soon afterwards, Herald of Free Enterprise was put up for sale, but, unwanted, she was renamed, all Townsend Thoresen identification being painted out, ready for towage to a scrapyard in Taiwan. Her final voyage was not without incident, as, breaking up in foul weather, she was put in at Port Elizabeth for temporary repairs at New Year 1988, arriving in Taiwan in March.

With most marine tragedies, there is a positive outcome in the shape of recommendations and requirements, designed both to avert future disaster and provide for the safe deliverance of all on board (as in the aftermath of the Titanic sinking).

Similarly, one generally identifies heroes and villains. Two George Medals, several Queen’s Gallantry Medals, and various commendations for bravery awarded in the wake of this tragedy shine some gentle sunshine on the darkness caused by the irresponsible behaviour of LEWRY, SABLE, STANLEY, and Townsend Thoresen.  Later in 1987 the Townsend Thoresen name disappeared, following the the aqusition of the parent company, European Ferries Group, by The Peninsular & Orient Steam Navigation who rebranded the ships as P&O Ferries.