THE HISTORY OF WADHURST CHURCH

A talk given by Martin Turner

Martin Turner, long term resident of Wadhurst, whose family connections with the village go back over a century, treated the Society to an informative and entertaining history of our local church in front of a near record audience at our first meeting of the year.   With excellent slides, fascinating anecdotes and Martin’s wry sense of humour, the past came vividly to life. 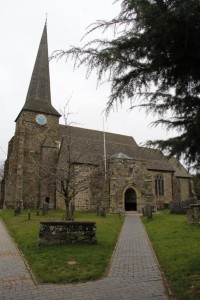 Martin reminded us that for many centuries when small communities were isolated with poor roads and little transport, particularly during winter, people had to be very self-sufficient.   Right up to the end of the C19th when Parliament transferred responsibility into secular hands, the church vestry was the agent of local government.   Chaired by the vicar and consisting of the major ratepayers, it was responsible for all aspects of the parish from roads to schools, health to poor relief, disputes and much else.

St. Peter & St. Paul, named after the founders of the Christian Church representing both Jew and Gentile, is a Grade I listed building probably built on the site of an earlier mission chapel in the C11th.   Comprising different era styles starting with the Norman period when the tower was built, the most recent addition is the re-sited vestry erected on the north side after a fire in 1911.   ‘God’s acre’ here is actually more generous, sited on slightly higher ground right in the heart of the village, where to the north the view is over land dropping away towards Bewl Reservoir in the distance.  The oldest inscription on a tombstone in the churchyard is 1716 but most burials, with bodies simply wrapped in a shroud, were still marked by a simple wooden cross for another century.   The beautiful eight-broach spire added to the tower in the C14th is currently the subject of an appeal to re-shingle its roof following recent storm damage.   Inside it carries eight bells, the oldest dating to 1670.   Just to the left of the C15th porch is a faint Scratch Dial, a rudimentary sundial which showed the bell ringer when to ring Mass.   In contrast, the chiming clock now adorning the spire was given by the Yeo family in memory of their daughter killed in the Hither Green train crash in 1967. 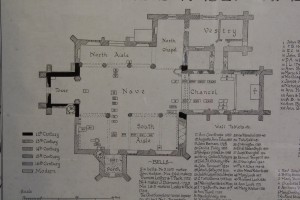 We were shown examples of early iron memorial slabs set into the floor, as well as wall mounted stone memorials to important local families the Barhams of Great Shoesmiths and the Courthopes of Whiligh.   Another dedicated to Mr. Legas, a forgemaster of Lamberhurst, and his wife Judith née Saunders has a curious feature in that of the two coats of arms incorporated below the inscription, his appears to have been erased, possibly by somebody who disapproved of his pretension, no arms for Legas having been traced!

Inside, the church is lighter than many because there is comparatively little stained glass    However, notable examples include a window at the east end put up in memory of the fallen of the Great War and a second one to it south commemorating the 33 men killed in WW2.   The oldest piece is a small window featuring Pope Gregory I which was brought from Nuremberg and installed in the clerestory in 1878 in memory of a curate.

Other items pointed out include a brass lectern in the shape of an eagle, the symbol of St. John the Evangelist, and a pair of floor candlesticks given in memory of the grandfather of Benedict Cumberbatch the actor.   There is also a very fine metal screen erected across the base of the tower in 1957. 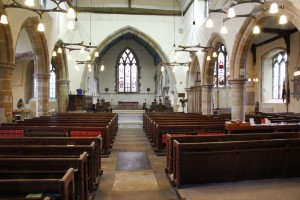 Designed by Duncan Wilson, it features local farming activities such as hops and lambs together with swallows, the emblem of Sussex.

From the list of incumbents painted on the wooden record board, Martin regaled us about the ‘unworthy’ Rev. James Wilcocks foisted on the Parish during the period of the Commonwealth!   He finished by giving us a glimpse of the Parvise, the little room at the top of the wooden stairway at the back of the church, possibly used to accommodate visiting priests in medieval days.