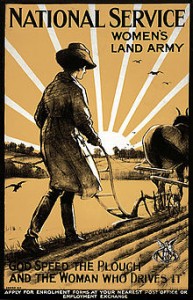 The first slide was ‘God speed the plough and the woman who drives it’, a National Service Women’s Land Army Poster.  It was from 1917 in the First World War when the country was on the verge of starvation. 200,000 women signed up to work on the land and in Women’s Forestry Corps. In 1919 this was all disbanded.

In June 1939 the Land Army again started recruiting although the farming community were very scornful that it was no place for a decent woman.  Lady Denman, who had started the Women’s Institute, was appointed as Director setting up systems for recruitment, enlisting, training, placements and the welfare of Land Girls. 5000 girls applied for a ‘healthy, happy job’ so by the time war broke out, 2 groups of girls were already trained. By 1941 all women aged between 18 and 21 had to sign on for some form of war-time work and the age range was then extended up to 45½. It was quite easy to be accepted for the Land Army. One girl who had poor eye-sight was told it was good enough to see a charging bull! In 1944 the number of Land Girls reached its peak at 70,000.

Uniform was provided. Best uniform included baggy brown corduroy breeches, long socks, a tie, a hat and waterproof coat while working clothes were brown dungarees and wellies plus coat. About a third of the girls came 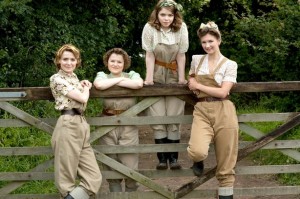 from towns where they had been employed as waitresses, maids, factory-hands, etc. and had never seen the countryside. Introductory training started in classrooms lasting 4-6 weeks including hand-milking model udders! For some, the reality of farming came as a rude awakening.

Initially girls lived in billets or lodgings near or on the farms where they worked. There food rations were increased allowing an extra 2oz of cheese per week for manual work. Later mobile gangs of girls worked on several farms and were housed in hostels designed for them by Billy Butlin. There could be up to a 1000 living in Nissan huts or a relinquished country house. Despite Lady Denver’s efforts the girls were only paid 28 shillings per week, 10s less than male workers.

The work was very varied. Ploughing with horses and later with American tractors became competitive. The hoeing of large fields was done in teams. Dealing with haystooks was hard work at harvest followed by several months of threshing during the winter. This is when the girls trained as rat-catchers caught thousands of rats as they ran out of the bottom of the stack. Most milking was done by hand 7 days a week. Other jobs included reclaiming fens, hedging, ditching, looking after sheep, poultry, pigs, market gardening and fruit picking. The girls could gain Proficiency Certificates.

Some girls became ‘Lumber Jills’ working for the Forestry in sawmills, making charcoal, cutting down trees and carrying out logs.

When Land Girls were invited to an Army dance they had to go in uniform wearing their baggy brown corduroy breeches!

At the end of the war the Land Girls had to carry on until male workers  could take over. Lady Denver resigned when the girls were given no gratuity or help with finding a job because they had been employed by farmers and not the state. The Land Army was disbanded in 1950. Those still alive in 2007 received medals.