The Story of the Crystal Palace

Our speaker, Ian Gledhill has had a life long fascination with the Crystal Palace. As a child he wondered how people went to the toilet in a glass house without being seen. Ironically it is believed the fire started in the staff toilet! 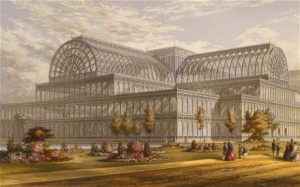 The idea for a grand exhibition was suggested when Victoria had been on the throne for 12 years in 1849. Her consort Prince Albert’s was not popular and needed a project to enhance his image. So planning began and the only space in London large enough for the estimated area to be required was in Hyde Park. Designs were invited, 245 were received and eventually rejected.

Into the breach stepped Joseph Caxton, head gardener at Chatsworth. He submitted a design for a giant greenhouse drawn on a piece of blotting paper, still preserved, which was accepted. It was a design using identical iron frames that bolted together  and was very quickly constructed at a  cost of £150,00. It was adapted to accommodate the mature elm trees on the chosen site. One unexpected problem was with the sparrows nesting in the trees. They had the habit of defecating causing an unsightly mess. Victoria sent for The Duke of Wellington. He found a solution – sparrow hawks – the birds left. The exhibition opened in 1851.  Visitors numbered several million,  having a great day out among the exhibits, ranging through the arts, industry, agriculture.  A profit of £180,000 was made and used to build many of the museums  and institutes still in existence.

But what to do with this vast greenhouse? Due to it’s design, like a giant Meccano set, it was easily dismantled and moved to Sydenham in August 1852 where it dominated the skyline for miles around. The name Crystal Palace, coined by Punch, gave it’s name to the area.

However, Paxton got a bit carried away. The building acquired an undercroft to level the site, extra storeys, a full length domed roof, the glass area doubled and extensive gardens with numerous fountains. It was opened  on 10th June 1854 by Queen Victoria. 4000 people attended the opening.

A lecture by H.M. Hart on fire never took place as the north transept was destroyed by a fire the day before.

There were 2 million visitors in the first year but due to cost overrun and high maintenance costs it  continued to lose money. Football was played there and Crystal Palace football club still exists. The Cup Final was played there from 1895 until 1914.

In 1913 the building, which up to then had been privately owned, passed into public ownership. It remained closed during W.W. 1 and reopened in 1920.

At 7.15 p.m. on 30th November 1936, while the manager, Sir Henry Buckland, was walking with his daughter Crystal, the fire was spotted.  With a strong NW wind the fire, which is believed to have started in the  staff toilets, quickly got out of control. How can a building of steel and glass burn? It actually contained a lot of wooden structures and had wooden window frames hence there was plenty of fuel. The glow in the sky could be seen over 40 miles away. So, having given it’s name to an area of London, the Crystal Palace was no more.