The Battle of Hastings – Mired in Controversy

Uncontroversial is that it happened: a terrifying, bloody, violent affair, over 8 hours on one day, 14 October 1066, in Sussex, won by 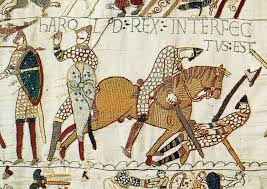 William, who, as victor, oversaw the Norman Conquest of England, and, in 1086, had drawn up a comprehensive register of all land, property, equipment,  people, animals, etc. into the Domesday Book, for fiscal purposes, seismic social change coming as a result.

Controversial is why William invaded, the size of his invasion force, his landing place, the exact site of the ensuing battle, and how Harold died and was buried, hindered by the inconsistency of fourteen primary sources, whose ecclesiastical authors were not actually there. Nor does the Bayeux Tapestry shed much light, it having been made as a cartoon of later edition, offering a Norman perspective for the unlearned.

England was a wealthy kingdom with a sound taxation system, taxes going to the king, a considerable potential source of income for William, should he become king. A dubious succession issue obtained, in that Edward the Confessor (died 1066), William’s second cousin, had no heirs, but had, apparently, named Harold Godwinson as his successor, a fact disputed by the Normans. William claimed to have been promised the throne, but his illegitimacy did not advance a strong blood claim. Religion was an issue, with a perceived need to realign England with continental France, for which goal William received papal support. Indeed, a papal banner was presented to William as colours for an army drawn from several Roman Catholic lands, whereas Harold and his late father, Godwin, had been excommunicated by the Pope years earlier for unauthorised replacement of an archbishop. Harold was crowned, by the Wytan, at Westminster Abbey on 5 January 1066, but the ‘real’ pretenders to the throne had been William, Duke of Normandy, and Harald Hardrada in the summer of that year.

The size of the invasion force

Norman records mention 750 ships, but various commentators quote 696, 3000, or even 10000. Certainly, there was infantry, cavalry with its horses, archers, and pre-fabricated castle sections, but a suggestion that 50000 mounted knights joined battle lacks logistical sense. There were probably some 7500 men on each side, evenly matched, at least numerically.

Where did William land?

Generally, Pevensey Bay is cited as the location. However, several Sussex parishes under Norman (Fécamp Abbey) control in 1066, paying dues to the Normans, were favourable for an invasion, their ports Franco-Norman settlements of some years’ standing. The invasion required good weather and fair winds, coupled with the need to sail on one date [Cf. D-Day 1944]. The Channel was crossed at night on 27 September 1066, making an unopposed landing along the coast. But where? Was it Pevensey Bay, Bulverhythe, or the Brede Estuary?

Where was the battle?

William’s men marched inland, via Boreham Hill and Ninfield (where, today, Standard Hill is known as where the Norman colours were set up), trashing lands and appropriating anything edible, and reached Telham Hill.  Harold had defeated his rivals for the crown, his half-brother, Tostig, together with Harald Hardrada, at Stamford Bridge in Yorkshire. Harald had brought over 300 longships full of veteran warriors, and the two men had gained a victory at Fulford, but were massacred in camp by Harold’s army, which then marched southwards to face William at, or near, Caldbec Hill, by the ‘hoary apple tree’, the exact location of which remains unknown. It is believed that communication had taken place, Harold being forewarned of the impending invasion and battle. The site of the battle is known as Senlac Hill, Battle Abbey having been built, (supported by evidence) where so many fought and died. William had vowed to build an abbey on the site of his great victory, as a penance. Battle, then, would seem, irrefutably, to be that place, its abbey one of the ten wealthiest in 1086, the town of Battle growing up around it over time. Sadly, after the battle, looters [Cf. Waterloo 1815] stripped the battlefield of all bronze, gold, and any useful thing, so that, 951 years later, any bodies and iron weaponry will have been consumed by acidity of the soil, thus removing any incontrovertible proof of the exact battle site.

How did Harold die, and where was he buried?

The commonly held view is that he was slain by an arrow entering his eye, yet there is no evidence of this. The arrow appearing on the Bayeux Tapestry is an addition of Victorian stitching [‘stitching’ indeed], but it is unclear whether it depicts Harold, who is probably the nearby figure being hacked to pieces. Visitors to Waltham Abbey are shown Harold’s grave in the church grounds, but other sites equally claim to be Harold’s resting place.

All the foregoing suggests why the Battle of Hastings is ‘mired in controversy’, yet the overriding fact is that, as a consequence of the battle, England became closely allied to Europe rather than to the Norse lands, Norman systems, advanced for the time, were put in place, and the country was reunited with the Holy See. A downside to this, of course, was 200 years of stubborn resistance to Norman rule, and struggles with France persisting until the 19th century.

Hugh was able to bring not only his expertise as a historian, but also his military experience.

Although Harold held the higher ground at Senlac Hill, a position normally affording a distinct military advantage, William had better trained troops, who had been preparing for this day for several months, had a definite purpose, and this being a non-return venture, the Norman ships having been set on fire upon fulfilment of their task.