The Hidden Collection at Scotney Castle

Ray Shayler works as a volunteer and room Steward at Scotney Castle and gave a fascinating talk on the hidden collection found in the attics with illustrations of many of the items. 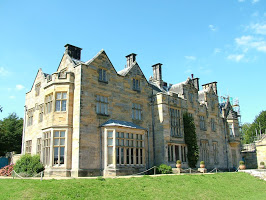 Scotney Castle was home to the Hussey family from the late 18th Century. Following the death of the late Mrs Elizabeth (Betty) Hussey in 2006 the National Trust made preparations to open the house to the public for the first time. The house was opened on 6 June 2007 and following the opening a team of 4 or 5 volunteers led by Ray and including History Society Members Lynne Dewar and Alison Rose began the task of exploring the contents of the 5 attic rooms which had originally been the Servants rooms.

At times they were working in the attics in temperatures of 3 degrees. Aware of humidity, they tried to wear industrial spectacles, but these just steamed up and so had to be discarded

Some documents were found inside a strange little cupboard in the wall that could only be opened using a special door which had a wooden flap and 600 items were found in an adjacent metal cabinet.

Edward Hussey’s Uniform of the Commander of the Royal Victorian Order was found in a metal Cupboard.  A letter from Buckingham Palace dated 1923 was also found marking Edward Hussey’s retirement as Bailiff in the Royal Parks, having served under Queen Victoria, King Edward VII and King George V

Also among the many unusual and interesting items that were found were:-

A collection of buttons used to secure servants uniforms

Henrietta Windsor Hussey’s photograph album dated 1864 which holds many photographs of the Hussey family including Henrietta’s Grandma Windsor. (Henrietta was the Great granddaughter of Robert Clive of India and married Edward Hussey III in 1883. They had six children which resulted in Scotney becoming a family home)

Also a Hussey family photograph dated 1886 that was taken in the library. The names of the family members including Henry Percy, a late edition to the family, are hand written on the cardboard mount.

A selection of leather covered books that detail where they stayed for dinner and Edward Hussey’s handwritten inventory, visitor’s book and accounts book.

A dirty, dusty envelope revealed 9 books of poems from 1905 – 1925 by Siegfried Sassoon four of which were dedicated to Rosalind Hussey and are now housed in the silver safe.

A woodwork box with tools.

The head of a hyaena that was caught by Arthur Hussey.

Lots of model cats – there is still a resident cat at Scotney.

A box of letters regarding an act of Parliament to allow Lamberhurst to have a primary School.

15 Journals of Arthur Hussey’s time in the 1st World War (A most interesting exhibition was recently mounted in the house entitled “Arthur’s War”).

A Botanical collection – Wakehurst Place identified all except 20 plants and a lady from Kew 14 others.

Lampshades galore, a breastplate for a horse, an interesting buckle, a machine to help you stop being depressed, a medicine cabinet – all labelled. Some anti-pregnancy equipment, several suit cases and a travelling trunk.

Some very damp and mouldy boxes including Mrs Elizabeth (Betty) Hussey’s sewing kit.  Her costumes were taken out and laid in the snow to help with the removal of the mould.

Other items that belonged to Mrs Hussey include gloves and finger stretcher, dresses including her coming out dress as a Debutante and a dress that had belonged to her mother. Mrs Hussey’s Wedding Dress, this was also covered in mould.

A dolly’s tea set and a picnic set.

A dressing set given to Betty by her brother with the initials B H (outside of her immediate family she liked to be known as Elizabeth) and her Grandmother’s dressing set.

Hundreds of maps including a map of Scotney Estate – 66 maps were discovered in one tin.

A stereophonic viewer with a set of graphic scenes from WW1 trenches.

An embossed plate presented to Mr and Mrs E W Hussey by their farm workers on the occasion of their Golden Wedding in 1950.

A box of coloured photographs showing how each room in the house looked then.

Attic room no. 3 was very damp and the furniture and boxes had to be moved away from the walls.

Country Life magazine and magazines from No. 1 through to the 1930’s were found.

Christopher wrote regularly for the magazine and every copy is housed in the house.

A pair of handcuffs that were found in a box of gardening equipment (all Hussey’s were J.P.’s).

A purse that contained a George IV shilling dated 1826.

An illustrated Ludlow book of family history and another History of the Darrell family.

A tallboy full of stationary including Queen Victoria and George V stamps.

It must have been very difficult working in temperatures of 3 degrees and must also have been very hard but interesting and rewarding work. I congratulate all of the volunteers who finally finished their task in 2013