For several days before it struck the Met Office had been forecasting that severe weather was on the way but as time went by, perversely,  they found it more difficult to predict the exact track and intensity of the approaching bad weather. As October 15th dawned computer models suggested that the storm was likely to pass along the English Channel affecting only coastal areas. In Wadhurst that Thursday afternoon winds were very light with no hint of the storm that was to come. Out in the Bay of Biscay a depression of 970 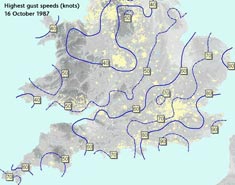 millibars at midday was deepening and moving in a north easterly direction towards Brittany. By 6pm the pressure had dropped to 964 millibars and at 6.30pm the Met Office issued the first gale warnings for the English Channel. Pressure continued to plummet and by 1030 pm it had fallen a further 11 mb to 953 millibars.

The depression, and its associated high winds, continued in a north easterly direction making its landfall in Cornwall and then moved rapidly across the south of England until it reached the Humber Estuary around 5.30 am on the 16th. The strongest verified gust measuring 100 knots (115 MPH) occurred at Shoreham on the West Sussex coast at 3.10 am and for several hours in the early morning of October 16th Wadhurst was pounded by gusts of between 80-90 knots (92-103 MPH).  At many recording points the wind was so strong that power supplies failed and measurement ceased so it is possible that some subsequent gusts exceeded 100 knots. Later analysis by the Met Office classified the storm as a once in 200 years event and it was concluded that the winds over the southern counties were probably the strongest since the previous Great Storm of 1703.

The storm has often been described as The Hurricane so was it really a hurricane? Certainly in places the winds were strong enough to be classified as such but the generally accepted definition of  a hurricane is a tropical revolving storm with winds that have reached a constant speed of 65 knots (74 MPH) or more,  so therefore technically it was not a hurricane. 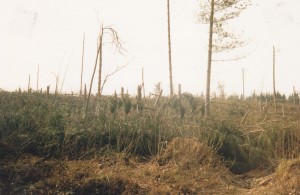 It was unfortunate that the early weeks of October 1987 had been wet and so when the strongest winds struck during the night the soft ground proved to be a poor anchorage. After a mild autumn many of the trees were still in full leaf presenting a much bigger target for the wind than had they been bare. Shallow rooted trees, such as the beech, fared particularly badly, almost every one of these majestic trees of Beechy Toll in Brick Kiln Wood being destroyed.  Virtually all the larches in Puxty Wood suffered a similar fate as did those in Snape, their trunks simply snapped like matchsticks. Neither did the more deeply rooted varieties, like the native oak for example, escape unscathed many just being blown out of the ground as were the famous trees of Sevenoaks while others had their tops shredded leaving a tangled wreckage of broken limbs. 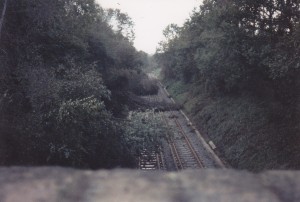 All around Wadhurst fallen trees blocked roads and travel to work for most residents was impossible. Hundreds of trees lay across the railway line to Tunbridge Wells which remained closed for several days while workmen cleared the debris. Telephone lines were destroyed and electricity supplies failed, bright flashes illuminating the angry night sky as the overhead power lines were brought down. The damage caused was so extensive that, despite engineers being drafted in from unaffected areas, many had a long wait before supplies could be restored, some households remaining without telephone and power for two weeks or more. 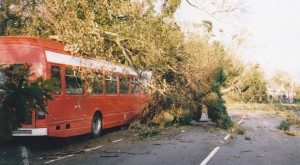 Many vehicles were damaged or destroyed by falling trees. At Castle Corner a tree fell on a bus sheltering in the nearby layby and a similar fate befell the St John ambulance parked overnight in Hook Green. Many other vehicles suffered damage from falling masonry and Val Tunbridge remembers being woken by a loud bang as the ridge tiles were ripped off her house, and then row by row, many of the remaining tiles were peeled off by the enormous wind landing on her recently acquired car parked below. 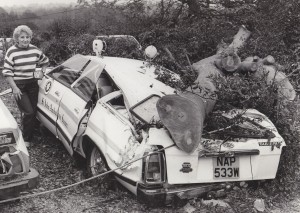 The Old Market Hall wrecked by the storm – 16th October 1987

Of course the damage extended far beyond broken power lines, uprooted trees and wrecked cars. All over the area roof tiles were sucked from oast houses removed by the dramatically reduced pressure on the lee side of these buildings which resulted from the effect of the enormous gusts on their round form. Miraculously most of the shops in the High Street escaped severe damage. The one exception was Rings the outfitters where tiles from buildings on the opposite side of the road smashed through their shop front showering their stock with broken glass. Such was the force of the wind funnelling between the shop and the next door building that large shards of glass were found to have shredded some of the stock of clothing, while many others items had to be retrieved from the far side of the churchyard. Rachel Ring remembers being called at 4 AM, at the height of the storm  just before the telephones went dead, to be told that one of the their tailor’s dummies had been found lying in the road more than 50 yards from the shop and, fully clothed, it had initially been mistaken for a human body! Not far away another building which for many years had been at the centre of Wadhurst life, the old market hall,  suffered an even worse fate being reduced by the incredible winds to a pile of rubble. 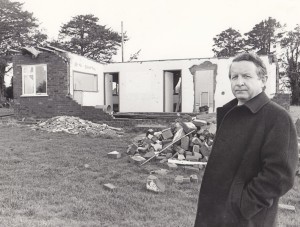 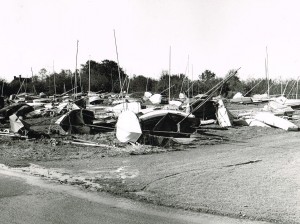 Peter Clifton, Chairman of the Cousley Wood Cricket Club and at the time on business in Norway, heard the bad news in an early morning phone call home. The club’s pavilion, so lovingly built by its members some years previously, he learned had suffered badly during the storm with the roof being completely destroyed. As a footnote it is sad to recall that whilst considering the building’s future the next big storm,  the Burns Day Storm of January 1990, finished the job completely wrecking the building and so necessitating a total rebuild.

Not far away Bewl Water located in a nearby valley found that this provided little protection from the vicious winds.  By morning the dinghy park had been reduced to a complete shambles with hardly a boat remaining undamaged while on the water the sight seeing ferry had been overcome by the conditions and had sunk offshore in shallow water with just the funnel and superstructure visible to mark its position.

The storm destroyed 15 million trees and did £2 billion of damage.  Nationwide it claimed 18 lives and terrible though this was had it occurred during the day it is likely that many more would have died. After the event the Met Office had to face a great deal of  criticism for not predicting the severity of the storm but several days prior to its arrival they had correctly forecast that bad weather was on its way and gale warnings issued on the day did give shipping a chance to seek shelter. Modern ships are very much more seaworthy than those of earlier times and suffered relatively little damage and it is also true that today’s housing stock stood up well to the extreme conditions.  These factors all helped to avoid the terrible loss of life that occurred in the Great Storm of 1703 when over 8000 people died