Although not of the magnitude of either the Great Storm of 1987 or the Burn’s Day storm of 1990 Monday 28th October 2013 brought unseasonably strong winds to Wadhurst. Dubbed the St Jude’s Day storm gusts of 70 to 80 mph were experienced over much of the south east of the country with the strongest winds being felt on the Isle of Wight where a gust of 99 mph (86 knots) was recorded near the Needles. 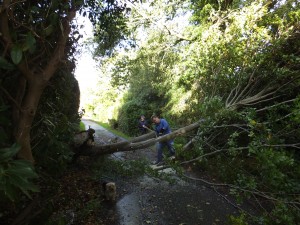 Like many before the storm originated on the Atlantic seaboard of the United States where a depression formed and moved quickly eastwards. As it did so a wave formed to its south which developed into a deep secondary depression making landfall on the Scilly Isles late in the evening of October 27th. From there it continued eastwards passing over southern England and out into the North Sea severely affecting the low countries as it travelled towards Denmark.

There have been more than 30 storms of similar or greater severity over the last 40 years but these typically have occurred during the winter months particularly in December and January and to a lesser extent in February. It is not surprising, therefore, that the storm was assessed by the Met Office as one of the worst 10 autumn storms to have struck southern England in the last 40 years.

The St Jude’s Day storm reached Wadhurst in the early hours of the morning and was accompanied by heavy rain. As in 1987 many of the trees were still in leaf and so were very vulnerable and much of the damage was caused when their rain soaked roots yielded to the vicious gusts blocking roads and damaging buildings. 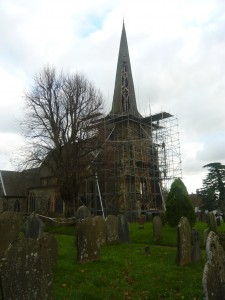 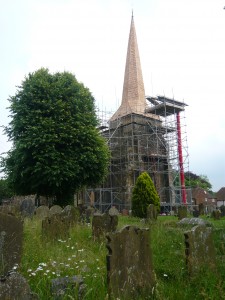 In Wadhurst the most significant damage was to the spire of the Parish Church of St Peter and St Paul which lost many of its shingles, sucked off by the negative pressure to the lea of the spire.

In the south of England four people were killed by falling debris during the storm and over 650,000 lost their electricity supply. The storm continued out over the North Sea killing three people in the Netherlands and eight in the north of Germany but it was in Denmark where the highest gust of 121 mph was recorded