Recently a small party from the History Society was lucky enough to be able to join a behind the scenes tour of Glyndebourne.  Blessed with a lovely sunny morning on arrival the group was ushered into the delightful Old Green Room where a

welcoming cup of coffee awaited.  It was here that, with spectacular views over the garden and the surrounding Sussex countryside, we met up with our guide and her assistant, and learned a little of the fascinating story behind the birth of opera in the Sussex countryside.

In 1934 John Christie founded the opera house at his home, Glyndebourne, encouraged by his wife, Audrey Mildmay, an enthusiastic opera singer who he had met at one of the opera evenings he frequently held in the organ room there. Under his guidance and despite the lack of any public subsidy, the small opera house flourished attracting many famous names and it wasn’t long before the original 300 seat theatre had to be enlarged.

In 1958 John’s son George took over the reins and subsequently the theatre was again enlarged but by the late eighties it had become clear that a larger totally new auditorium was required. Displaying great courage and determination George saw through the design and build of the magnificent new £33M Opera House the construction of which began in 1993 and it reopened the following year with a performance of Le Nozze di Figaro. In 2000 George handed over the Executive Chairmanship to his son Gus who currently continues to oversee the running of Glyndebourne. 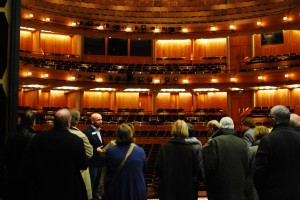 The Auditorium – by Andy Orwell

The impressive new 1200 seat auditorium will be familiar to many of you but the size of the area behind the curtain is truly amazing dwarfing such props as the beautifully constructed replica Austin Healey sports car which greeted us as we entered. The complexity of putting on several different performances in quick succession soon became apparent. Our first stop was at the front of the stage looking down into the orchestra pit, the floor of which we learned can be raised and lowered to cater for different orchestral requirements. There looking out over the pit we got a performer’s eye view of the auditorium. Great care was taken with its design to ensure a first class acoustic and such was the attention to detail that even the seats had to be specially designed with this in mind and it is pleasing to note that it is generally accepted that this has produced an outstanding result. 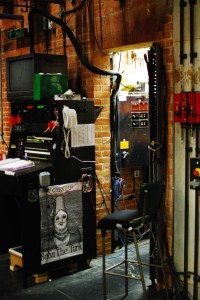 The Control Console – by Andy Orwell

To the left of the orchestra pit is an impressive control panel. The Director of a new production is responsible for its practical and artistic development but after he or she is satisfied with it the daily performances are normally run from here by an Assistant Director whose job is to co-ordinate all aspects of the performance and ensure that everything goes smoothly on the night. To do so he has to be able to read music and has to follow the score bar by bar from beginning to end.

Adjacent to the huge main stage area are two rehearsal rooms the larger of which is equipped with seating and is really a mini theatre where not only rehearsals take place but small scale productions can also be put on. The back of the stage is designed so that lorries can reverse right up to it and by means of a lorry lift their platform heights can be adjusted to stage level enabling scenery and props to be wheeled straight onto the waiting vehicle.

From the stage area a flight of stairs lead to the costume department and here again the famous Glyndebourne attention to detail was apparent. To the delight of the ladies many costumes were on display and it is interesting to note that every garment is hand-made and has to fit perfectly. Another interesting fact is that many of the costumes have to be duplicated as lead singers and their understudies are seldom exactly the same size or shape!

The tour concluded by visiting the auditorium and as we gazed down on the stage from the upper circle we did so in awe and with a much better understanding of the complexities involved in putting on a world class opera.  On the artistic side performance schedules have to be planned in good time, leading singers and orchestras must booked years in advance, directors engaged, and applicants for the chorus auditioned. Behind the scenes there is an army of stage hands, IT men, electricians, lighting engineers, maintenance men, gardeners and many others in addition, of course, to the administrative staff who are needed to run an enterprise of this size and complexity.

It is remarkable that, despite receiving no public subsidies, Glyndebourne takes its environmental responsibilities very seriously indeed as evidenced by their investment in the recently installed wind turbine which now produces 90% of their enormous electricity requirement. We all came away very impressed.

Thanks are due to the guides who made the tour so interesting and patiently answered all our sometimes banal questions. Should you wish to learn more please click on the  Glyndebourne website