You’ve Never Had it So Good

Macmillan’s immortal phrase from July 1957 provided a title for this talk, in which Don Dray allowed us an insight into Britain during the period from the end of the Second World War until 1960, as its people learned to live again. 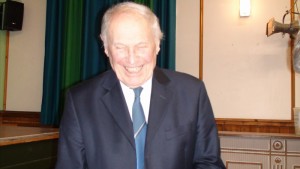 With peace came change: rationing, an economic downturn, and destruction all around. Austerity Britain. Demobbed servicemen returned to families from whom they had grown apart, and to children they hardly knew. Politics was not immune: Churchill, the war leader, was out, Clement Attlee’s Labour administration came in, bringing sweeping reforms, including nationalisation (not least, of the Bank of England), the birth of the National Health Service, and much rebuilding. Providing housing for some, prefabricated houses (“prefabs”), erected in 4 hours, were intended to enjoy 10 years of life, while many blitzed Londoners found homes in growing towns such as Stevenage, Haverhill, and Crawley.

Like many other commodities, clothing was rationed, “make do and mend” being the watchword. Dior introduced his New Look in 1947, and a Pontypool factory turned out nylon stockings. The emphasis at this time was on bright colours, artificial fabrics, and affordable prices, as the 1940s moved into the 1950s, accompanied by the bikini, stiletto heels, beehive hairdos, and all kinds of use made of plastic.Frankly speaking, Britain was rather poor, Beveridge, in his Report, demanding that those five “giants” of Disease, Ignorance, Want, Idleness, and Squalor be slain, in favour of a healthy society. One’s offspring could enjoy free milk, subsidised orange juice, and school dental checks, yet certain “giants” still roamed at large: polio, influenza, whooping cough, and appendicitis, which could, and often did, kill.

Cycling became the fundamental mode of transport, as well as a means of keeping fit, since few could afford cars until the late 1950s. The bus was extremely popular until around 1960, but those fortunate enough to drive discovered a sense of freedom and unrestricted parking, at a time when heavy freight was still borne on rail. Civil aviation was in its relative infancy, although Croydon Airport soon gave way to a new airport, near Hounslow, soon known as Heathrow. Gatwick waited not far behind. Those entering the country as immigrants came by ship, the first wave being brought over from the West Indies in 1948, with regular additions thereafter.

On the work front, traditional trades were threatened by mass production, women’s employment was on the increase (although these new, independent women could expect only 50% of a man’s pay for the same work), and tension in the search for a job brought with it a degree of racism, a situation also evident in the hunt for accommodation (punishingly high rents if one could find anything, but “no Blacks, no pets, no Irish” very much the order of the day), and the apparently innocuous graffiti “KBW” standing for “Keep Britain White”. Despite all this, in the Britain of the day morality was strong, as was obedience to the Law, loyalty to the Crown, and respect for the Church.

Children had great liberty at play, both indoors and on the street, demonstrating more imagination than today’s seemingly total reliance on computer-driven games, and the production of toys enjoyed rapid growth, still continuing in 2016. Those 1950s children initially received a small amount of pocket money, largely spent on comics and – once rationing ended – sweets, but older boys could earn extra income from doing a paper round (braving early starts, often in the bitter cold). The desirable playthings of the period included Hornby train sets, Barbie dolls, and Dinky Toys, as manufacturers recognised a growing market for the “Baby Boomer” generation.

For entertainment, swing music arrived from the USA, and the jive became the rage, but the cinema reigned supreme. Before television sets became a feature in most homes, films from Ealing Studios or Rank were highly valued, and pin-up photos (Doris Day, James Stewart, et al) were the “must haves” of the day. Bingo, dances, musicals (Oklahoma!), bicycles, cars, and holidays (Butlin’s camps, hop picking, or seaside guesthouses) provided the fun. The beaches, “open” again post-war, were a great magnet, as was watching football, with crowds at record levels after seven “lost” seasons. Football was never more popular than in the 1940s and 1950s, and crowds also patronised cricket (Denis Compton scored a record 3,816 runs in one season) and speedway. Strangely, the 1948 Olympic Games, held in London, did little for the country, as the stronger, better nourished Americans amassed most of the medals.

Within the home, entertainment was initially provided by the wireless, offering three distinctive services on its Home, Light, and Third programmes. Listeners adored Mrs Dale’s Diary, Round the Horn, Dick Barton, and Housewives’ Choice, but the 1953 Coronation saw a surge in the acquisition of television sets, some 20 million viewers witnessing the event on their small screens. Radio comedy remained in vogue, with The Goon Show, Hancock, The Navy Lark, and The Glums immensely popular during the period, during which great optimism was evident in the British people.

These years were not without their tragedies: the early death of HM The King, floods at Lynmouth and Canvey Island, loss of life for 28 at the Farnborough Air Show, the death of 102 when three trains collided at Harrow, and the Munich air crash, to name a few.

However, all in all, the people of Britain had truly “never had it so good” as during that decade and a half of hope, reconstruction, the promise of a bright future, the introduction of labour-saving appliances in the home (washing machines, refrigerators, and vacuum cleaners), and the ability to shop under one roof in the new “supermarkets”, when they really did learn to live again.