Thursday 7th May by Michael Smith 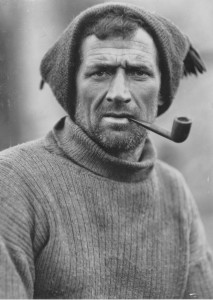 Tom Crean’s adventures took place in Antarctica when on expeditions with Scott and Shackleton who both recognised his worth.

By lucky chance when Scott’s ship, the HMS Discovery, called in at Lyttelton Harbour in New Zealand, one of the sailors deserted ship. He was replaced by a volunteer from another naval ship in port at the same time. This volunteer was Able Seaman Tom Crean who proved to be a most valuable Antarctic explorer.

In 1900 only the coastline of Antarctica had ever been visited. Scott’s was the first expedition to see how far south they could travel on land. Crean was in the advance party which laid out depots for those following behind. They were rapidly introduced to the difficulties of man-hauling sledges up glaciers and camping at temperatures that went down to -67° C, with dogs as their companions! The expedition reached within 300 miles of the South Pole high on the Antarctic Plateau. All returned home much wiser.

After a few more years in the navy Crean was recruited for Scott’s next expedition to Antarctica for the race to the South Pole. This time they took Siberian ponies as well as dogs but still had little idea of handling them. It was a 900 mile walk to the South Pole, across the Ross Ice Shelf, up the Beardmore Glacier, and across the Antarctic Plateau dragging sledges all the way. Crean was in the last support group to turn back when just 150 miles from the pole. He was in tears when Scott told him that he could not go on because of his smoker’s cough.

On the journey back to Base Camp, one of the three men, Evans, collapsed from scurvy and had to be carried on the sledge. Eventually Crean left the other two and walked the last 35 miles alone to fetch help. It took him 18 hours, with only a couple of biscuits and some chocolate for sustenance, before he stumbled exhausted into the Hut. Evans survived and later became an Admiral while Crean was awarded the Albert Medal for his rescue.

Crean was in the search party who searched for and located the missing Polar team. It is amazing how they managed to navigate so accurately in such hostile conditions.

Just a year later Crean was enlisted by Shackleton to cross Antarctica on foot. They never started the walk as their ship, Endurance, was beset by ice. In the next 10 months the ship drifted northwards in the Weddell Sea before eventually being crushed by the ice. With three ill-equipped lifeboats for the 28 men, they reached the edge of the pack ice and sailed to Elephant Island. Crean was one of the six men who then undertook the incredible boat journey to South Georgia and then one of the three to cross the mountains to the whaling station on the other side of the island. Through all these experiences Crean was often recorded as the one who still smiled and sang.

If you would like a small adventure with an Antarctic flavour, then why not visit The South Pole Inn to see the Polar medals and other memorabilia, but no diary, of Tom Crean. This is where he set up home in Annascaul, County Kerry, Ireland.