The History of the Wadhurst Brass Band

Mr E.L.G (Algy) Hoare BEM our well known and highly respected conductor of Wadhurst Brass Band, told us about the History of the Band. Algy started by demonstrating some of the instruments: a trumpet, French horn, post horn, cornet, trombone and a German hunting horn all had their turn with wonderful sounds. We were told the story of the trumpet went back to the beginning of human history; the bible testifies to its importance in early religious ceremony and Homer to its use in Battle.

Brass bands were first founded in about 1830 mainly sponsored by manufacturing firms and amongst miners. Contests were encouraged and arranged. It was not long before towns and villages had their own brass groups and in 1871 Wadhurst’s first band was formed and played at local functions and on Saturday evenings in the square. Eventually through lack of funds that band broke up.

In 1896 the band reformed with Charles Piper as the conductor and with 8 players. There were strict rules and members were expected to be of exemplary behaviour and appearance. Should a member have to appear in front of the local magistrate this would lead to expulsion. In 1898 the Parish Magazine reported that the Brass Band had given an excellent concert in aid of the Football Club funds. In a later year the Secretary and Treasurer, Mr AG Watson, reported that the Band had a successful year and at 24 of the engagements it had played for free.

The Band continued up until the Second World War when it became defunct for a variety of reasons. One or two attempts were made to start it again, but all to no avail. Some players joined other bands in the area including the Salvation Army which had its own local Band at the time.

In 1957 Algy came to Wadhurst and joined the Brass Band at Mayfield. He was employed as the woodwork master at the Secondary Modern School, which at that time was in Sparrows Green. Algy found it refreshing to have a quick blow on the trumpet between lessons! This encouraged several pupils who expressed an interest to learn.

With the school’s subsequent move to the present Uplands site, Fred Sparks arrived. He was a new music teacher and keen instrumentalist. Tuition started in earnest shortly followed by the formation of a small orchestra and brass group. Algy soon found himself teaching as many as twenty pupils during lunch breaks and after school. 1970 was a turning point, Cyril Rimmer became the new Headmaster and Algy got a year’s leave to study music at Trinity College of music in London. During that time George Mallion from the Salvation Army Band, helped out with brass lessons. The Uplands Band band, as it had then become, soon won first prize in their section at the Tunbridge Wells music festival.

In 1974 it was decided to set up a Wadhurst Youth Band, this became a platform for school leavers and some of the more promising players still at school. Now more good instruments were required and much fund raising was undertaken. 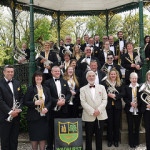 1983 saw the formation of the fully titled Wadhurst Brass Band which brought in an influx of older members. Since then the Band has grown from strength to strength attracting members from as far afield as Bromley, Sevenoaks, Tunbridge Wells and Crowborough and playing in concerts throughout the local area and also in Germany, Belgium and Holland all several times over. The year 2015, was the 100 year anniversary of the battle of Aubers Ridge in Northern France, where 25men from Wadhurst were killed. This has been a particularly spectacular year for the Band and has demanded a great contribution to the Memorial events both here and in France and has included playing at the Menin gate in Ypres.

Algy’s talk was much appreciated by the large audience.