Without the benefit of the iPhone there are few pictures to highlight the damage inflicted on Wadhurst during the Great Storm of 1703.  Starting on Wednesday 24th November the storm raged for 9 whole days until the 2nd December. The strongest winds were experienced on the night of 26/27th and undoubtledly would have caused a great deal of damage throughout Southern England. Of course, the modern science of meteorology did not exist at the time so we can never be sure, but it is likely that the storm formed in much the same way as the Great Storm of 1987. Certainly the centre passed over the south of the country exiting somewhere along the coast of East Anglia in much the same way as it did in 1987 with the strongest winds, of up to 140MPH, occurring in the English Channel and along the south coast. 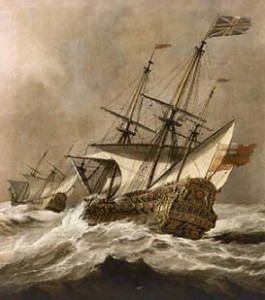 The Resolution by Van de Velde the Younger

The night of November 26/27th was disastrous for the Royal Navy which lost 13 major warships mostly along the south coast.  HMS Resolution was driven ashore at Pevensey but the ship’s company was lucky and all 221 were saved. Not so fortunate were the crews of Restoration,  Mary,  Northumberland,  Stirling Castle and Mortar-bomb all of which were driven onto the Goodwin Sands where only three crewmen escaped drowning. Many other ships were forced out into the North Sea, some surviving to return days later but others never to be heard of again. It is believed that up to 130 merchantmen were lost, many of which were from the fleet of colliers that, at the time, carried cargoes of coal down the east coast from Newcastle to London. Some would have been moored or at anchor when the incredible winds struck breaking their lines and driving them out to sea where the majority foundered and their crews perished. The damage at sea was not confined to shipping when the Eddystone Lighthouse off Plymouth, constructed just five years previously, collapsed taking its designer, Henry Winstanley, and the other five occupants to their deaths.

Ashore trees were uprooted, chimneys collapsed, houses were destroyed and in London every one of the 130 church spires was damaged. Across the country hundreds of windmills were destroyed, the wind causing many to overspeed and their wooden machinery to catch fire. Flooding was extensive particularly in East Anglia and along the Severn where tens of thousands of sheep and cattle perished. The speed of the wind brought down millions of trees and drove salt spray as far inland as Cranbrook where animals were reported to have refused to graze the salt encrusted grass.   The maximum wind gusts were similar to or slightly stronger than those of the Great Wind of 1987 but the stormy weather lasted much longer so contributing to the enormous loss of life. It is variously estimated that between 8000 and 15000 people lost their lives during the terrible nine days the storm lasted.