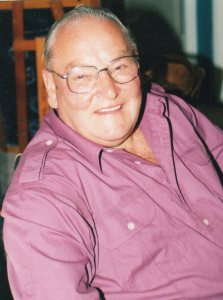 On 12 November 2014 the History Society of Wadhurst stayed close to home and gave ear to two presentations, one by Anthony Cosham about the photograph and archive collection of his late father Stan, and from Joan Grace and Stephen Anderman on the history of the church clock, two topics at the heart of the community.

‘I must show you my latest acquisition’ – Memories of a community’s recording angel.

Anthony Cosham, who says he is often mistaken for Stan his late father, brought to life Stan’s passion for collecting, which has provided for Wadhurst a treasure trove of photographs and documents of the history of Wadhurst over his own lifetime. This collection is now under the guardianship of the Wadhurst History Society.

At 3. 23 pm on 20th January 1956 an event which marked Wadhurst for ever, and which made the national as well as local radio TV and newspaper press, occurred when an RAF Meteor jet crashed into the row of buildings on which now the One Stop and its adjacent shops stand, damaging the cottages at the top of Washwell Lane and destroying the Queens Hotel. Anthony was 4 years old at the time, living in Pembury, and recalled his father hurrying to Wadhurst to learn whether his sister Jean, married to Percy Skidmore and living at No 3 Washwell Lane had survived. Four adults, including the pilot and co-pilot lost their lives in that tragedy. Photographs of the devastated buildings formed part of Stan’s collection from the early days, and he went on to record in photos most of the major events, and the people that took part in them, for many years afterwards. In October 1958 his father took over the tenancy of Jean and Percy’s house when they moved away, and for the rest of his life Stan was a Wadhurst man. 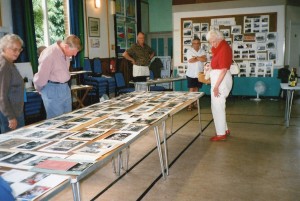 Stan collected not just photographs, he also collected memorabilia of events, such as programmes of performances by the Wadhurst Dramatic Society, and tickets from the 1960s and on, show schedules and photos from the Wadhurst Gardening and Allotments Association, from 1928 to 1970, parish magazines from the 1920’s to 1950’s, the local school, then housed in what is now the Youth Centre, with its portraits of Edward VII and Queen Alexandra behind photos of the pupils, Wadhurst Farmers from 1900, star turns like Joe Davis in 1949, Wilfrid Pickles presenting ‘Have a Go’ in 1954 and Dickie Henderson in the 1970’s. He photographed local people, such as Joyce Harmer as the Carnival Queen, in events that occurred in the village thereafter. He collected auction and sales catalogues recording sales of some of Wadhurst’s best known properties, such as Durgates Lodge in 1889 and in 1926 Shovers Green and Nomansland Farms, the opening of the swimming pool in 1966, sited near and old pond, dispossessing the local colony of frogs who every spring would return and try to breed in it. He joined the Footpath Society with the family in 1974 and recorded the walks for 12 years, and every shop and business in the village was photographed for his collection.

He was not known ever to have said no to anything offered, and was eager to show and explain his collection to anyone who asked, and if not asked he would say, ‘Have I shown you my latest acquisition?’ 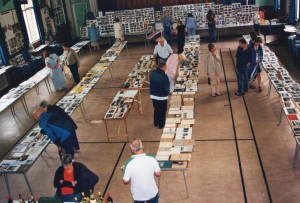 He and Charlie Bocking collaborated to mount an exhibition in 1984 as a joint venture and Stan held another exhibition in 1987. He donated funds to the Scouts, the Hall and Field fund, and to Belmont Surgery. In 1990, he was sponsored to go up in a hot-air balloon taking his camera to record Wadhurst and its surroundings from the air. He persuaded the steeplejacks repairing the steeple to take his camera up and photograph the views from the spire. His collection included photos of the 1911 coronation of George V, 1919 ending of WW1 George V’s Silver Jubilee and the Charter Celebrations of 1903 and 2003, together with commemorations of the Battle of Aubers Ridge. His collection of newspaper cuttings filled 60 scrapbooks of which Antony has edited 20 so far. Some memorable images include the Courthopes of Whiligh, family and staff, George Courthope’s car in 1900, his election as MP in 1910, Daphne and her sister, haymaking and timber felling on the farms.   Anthony reminded us that timber felled on the Whiligh estate had been used in the roofing in Westminster Hall.

One of the most poignant and unusual items in the collection is a hard biscuit from World War I given by a unnamed soldier to his sweetheart, and tied with a little blue ribbon. Did he return?

Anthony’s recollections reminded us that Stan has recorded our history and his collection is very personal to us all.

rejuvenation of our ancient clock, led by Joan Grace who with Stephen Anderman presented to us, on 12th November 2014, a narrative of how this was achieved and the history of the clock itself. From the exterior of the church under the golden shingles of the new spire, we see its blue and gilded face. Lower down the tower, inside a small window sits a piece of Victorian engineering of mesmerising complexity called a flatbed turret clock.

It was made in 1873 by Gillett and Brand, possibly replacing an earlier timepiece or perhaps a sundial shown in a picture of the church known to date no later than 1846 [when Clavers Lodge was demolished] and mentioned in A A Wace’s book on Wadhurst as existing as early as 1822.   On first view of the mechanism, its relationship to a modern timepiece seems coincidental and more akin to a Heath Robinson invention than something that actually works, but Stephen and Joan demonstrated that it not only does work but helped us to understand how it works. Striking Train, Going Train connects to Chiming Train, via levers, cogs, brass wheels with notches at irregular intervals, all originally caused to move in their predetermined ways by great weights memorably calculated by Joan as numbers of suitcases [ten suitcases represents 40lb] powering pendulums and moving the hands visible on the exterior of the tower giving no clue to the viewer outside of the genius of the engineer within. The gravity escapement, similar to the one designed by Lord Grimthorpe for the clock in Big Ben, which would double as a modern sculpture in any respectable art gallery, demonstrated the connections of the various parts of the clock in motion. A still image has its power to inform, a moving image had us all sitting up and taking notice, as the gravity escapement leapt into life, and activated the beautiful brass wheels with their cogs, teeth, and levers. Fly wheels whirred around maniacally, in fact soothing the machine into a 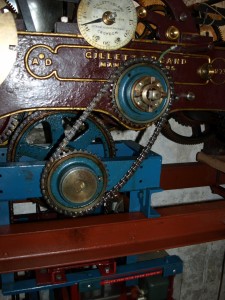 Part of the Clock Mechanism

legato rhythm in perfect time, whereas, Joan assured us, without the fly wheels the machine would have a tendency to run away with itself.   Typically British seemed the device of using small loose change strategically placed to raise the centre of gravity to make the clock go faster or slower.

The clock had to be wound every two and half days, by a sturdy chap or two climbing the tower and winding the huge weights from the ground to the top thirty feet up. Not surprisingly, such chaps could not always be found, and by the 1960’s the clock stopped. The then Rector, Revd. Plumley gave instructions for an overhaul, however that the chimes should not be reinstated as ‘there was no local demand for the chimes’.

Between 1972 and 1974 Roy Albinson and his wife overhauled the mechanism, made the flat bed flat again, replaced the rotten wood with steel girders to make safe the housing of the clock.   The same bells are used to make the chimes as are rung by the change ringers, only a hammer hits the rim of the bell to make the clock strike and chime.   This work was financed by Brigadier and Mrs Colin Yeo, and a commemorative plaque was installed to remember their daughter Cathy who died in the train crash of 1967.

The clock remains a work in progress with further observation of its performance leading to further adjustments over time. Automatic winding mechanisms now obviate the need to haul up the weights every two days.   Having seen Joan and Stephen’s slides and the video clips of the mechanism, one can see how, similar to a musical score, the design of this magnificent machine has the power to make music in the Wadhurst soundscape. Mere words cannot do justice to the visual impact of the presentation and a view of Joan and Stephen’s power point collection is recommended.