From time to time unusually cold periods do occur throughout the country but one of the first to be recorded in the Wadhurst area happened in 1624 when snow was reported to be lying on the ground from January through to March. 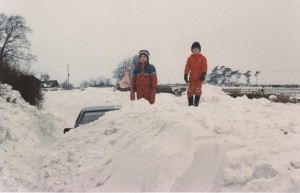 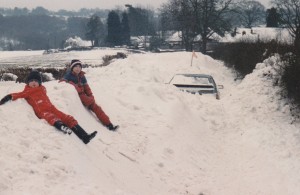 Over the centuries there have been many other abnormally cold spells but, within living memory, one of the worst occurred in 1947 when blizzards swept across Southern England on 27th January. For many it was a miserable time, most houses were not centrally heated and blocked roads lead to shortages of coal for fires and electricity generation resulting in power cuts to both homes and businesses. The cold weather continued throughout February until mid March when a thaw set in.

Many will also remember the winter of 1962-1963 when heavy snow started falling in Wadhurst late on Boxing Day and continued all night and into the following day. The cold weather lasted throughout the months of  January and February until it began to thaw in early March. 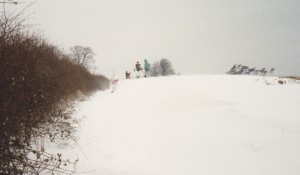 Where exactly is the road? – Whitegates Lane, January 1987

Nineteen eighty seven will of course be remembered for the Great Storm but less well known was that  between January 11th and 14th  Wadhurst and much of the country experienced heavy snowfalls and extremely cold weather. In fact so cold was it that the period between the 12th and 14th was described in a Meteorlogical log as the coldest spell in southern England since 1740 with Warlingham in Surrey reporting a daytime high of -9.1ºC (16ºF) on the 12th while in Caldecott, Rutland the overnight temperature fell to -23.3º C (-9.9ºF). The extreme weather was caused by high pressure from Siberia moving into Scandinavia producing a strong easterly wind across Britain which picked up large quantities of moisture as it crossed the North Sea. At the same time low pressure over Italy had the effect of increasing the wind speed and this in turn caused widespread severe drifting over the east side of the country including in Wadhurst. Although not quite so severe, the cold spell continued from the 14th until January 18th when a rapid thaw set in.