Russell began a fascinating talk by showing how in 1939 70% of Britain’s food was imported, contrasting with Germany where 75% was grown in the country itself. Most was imported from the British Empire, in exchange for manufactured goods. With shipping threatened by the German navy radical measures were needed urgently. 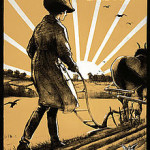 Farms were encouraged to bring unused land under cultivation. War Agricultural Extension Committees detailed farms across the country and expected production to be maximised, under threat of takeover. With many farm workers leaving for conscription, the Women’s Land Army was created, rapidly expanding, with 17,000 in 1939, 42,000 in 1941 and 81,000 in 1942. Lady Denman of the Women’s Institute led the surge, ensuring appropriate training facilities and encouraging attractive posters for recruitment. By the end of the war nearly a quarter of a million women had served in the Women’s Land Army and farms were most enthusiastic for their work. Appropriate recognition through medals was not achieved, however, until the early 1990’s.

People were urged to convert their gardens for food production, with a campaign to “Dig for Victory”, so that ships could carry men and munitions rather than food from the Empire. Soon 20% of the country’s food was secured that way. Free pamphlets provided guidance on growing vegetables, creating compost or how to prune most effectively. First the Royal Horticultural Society and then its more local equivalents provided expertise and experience. The wireless in homes throughout the country passed on gardening tips through programmes such as “The Radio Allotment” and “In Your Garden with Mr Middleton”, which attracted three and a half million listeners on Sunday afternoons.

Some back gardens placed their emphasis on livestock instead, most especially poultry and rabbits. Other space was compromised through the creation of Anderson shelters, some two and three quarter million overall. Yet compensatory provision was found elsewhere through the creation of allotments, such as in the dry moat at the Tower of London and in parkland.

People adapted to food production as the situation demanded, as in the perfect potato growing soil of the Isle of Wight and, if German bombers threatened it by dropping colorado beetles, children became adept at collecting them.

The society responded most warmly to an entertaining and very well illustrated presentation.